It’s been a long two weeks for the crew of AF1 Racing preparing for the coming weekends of testing their formula 1000 car. The plan was simple, start at a small time track and then ramp things up for Circuit of the Americas track day. What started off as a small idea of venturing into the world of formula 1000 racing via an Aprilia powered carbon clad car has now gone full scale with AF1 Racing becoming the official importer for the Griiip G1 series cars.

AF1 racing, known in the Aprilia world as the “go to” for parts, knowledge and service, heard about an Israeli engineered, Italian produced formula 1000 utilizing the 65 degree v4 motor used in the Aprilia RSV4 it was at that point owners Ed Cook and Jon Francis decided to make contact with Griiip and see about purchasing one, maybe two. The AF1 staff has always had a variety of cars ranging MK4 Supra to Lotus Esprit, replica P4 Ferrari’s to Roush S550 mustang and everything in between. The variety is never ending as is their love for anything motor sports.

Arriving in one large dull shipping container one would be hard pressed to believe a race car would be inside; however opening the large dual doors reveals the latest purchase. Weighing in at a measly 390kg wet (859 pounds for us Americans) the Griiip cars were easily fork-lifted to safety and gently rolled into their new home. Removing the fiberglass body panels reveals the 4130 tubular chromoly skeleton, an extremely lightweight pushrod twin damper suspension front and rear suspension with 36mm springs. Slide the engine cowling off and the heart is exposed a dry-sump 201hp 1000cc Aprilia V4 motor mated to a 6 speed sequential gearbox with a driveshaft to a Viscous limited slip differential. Dual side ducting allows the oil cooler and radiator to keep temperatures down. 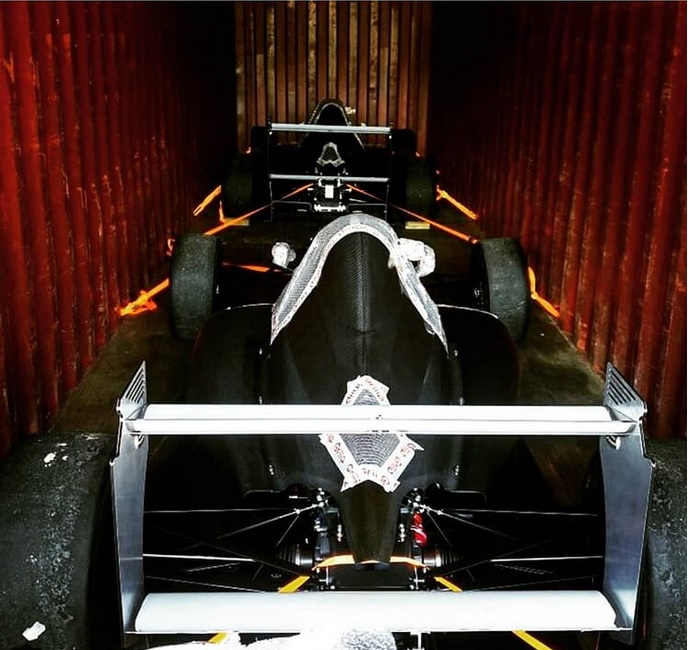 After several months of preparing, fabricating tools and purchasing track day safety items the AF1 team was honored to host Aprilia guru and software mastermind Gabro of Gabro Racing from Italy for a shakedown of the new chassis on a 1.82-mile, 11-turn, 150’ of elevation change asphalt road course just south of Austin. Firing up the engine releases a vicious bark and slowly tapers back down as the fluids begin to reach operating temperatures. Owners Jon and Ed each have a turn climbing onto their own molded seat tucked away in the cramped cockpit. Staring them in the face is an array of color coded switches and lights with a 3 inch center display. Entering the track clockwise, they begin the first right handed sweeper and begin to ascend into the high part of the track. After a right hand horseshoe the track makes a dramatic off camber blind left corner. The car fights to maintain traction over the rough repaved sections and maintain grip (no pun intended) at partial throttle on the slick straightaway. A solid day of testing achieved, but one more week will pass until the true test comes in the form of a world class track. 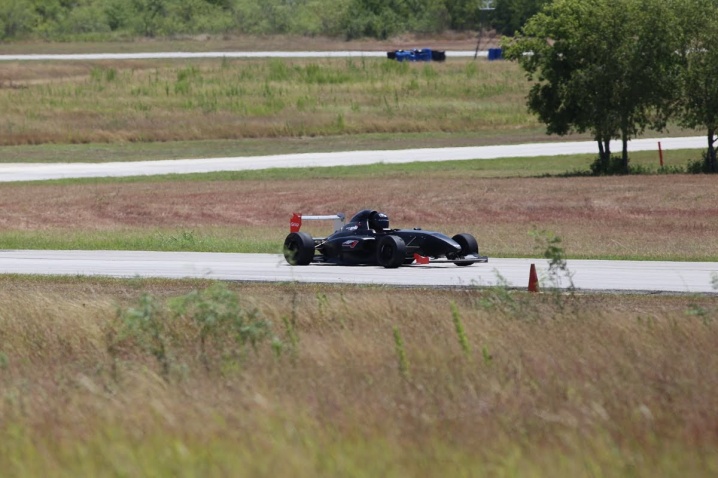 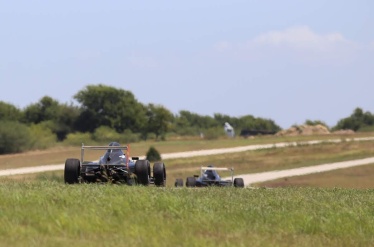 Three days before the scheduled Circuit of the Americas visitation Tamir Plachinsky and Dror Hazan from Griiip flew into Austin for a full tear down and reassembly. AF1 and Griiip teamed up and spent countless hours working before Formula 1000 champ driver Alex Mayer would wrap his hands around the AIM built steering wheel. The end goal was to beat 2:09.

The first track session would include the likes of a ZR1 Camaro and ST2 prepped Corvette Z06 vastly dwarfing the lightweight open wheel car. The crisp morning’s temperature began to fade as the Texas sun began to rise and shine down upon the facility. The 3.42 mile track provided more than enough room for the car to stretch its legs, but after a day plagued with traffic, black flags and the obvious need for suspension adjustments the best the Alex could manage was a 2:10.  Still one second shy of the goal. 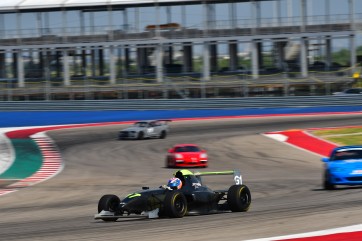 Day two and the unyielding Texas heat would make its usual appearance providing a sticky track surface, sunburned faces and dehydration.  Alex now more familiar with the track and the traffic structure, along with the ever present black flag is waiting for the opportune time to make a clean lap. Alex and the car are finally in tune with each other as the last session of the day rolls up. A final pre-lap to inspect safety and performance before the car hurdles down the front straight darting past traffic as if they were standing still. The V4 motor’s growl echoes through the grandstands as it speeds towards the front straight away hill. Every sequential downshift after leads to a quick pop of exiting gases as it comes in hot to turn 1. The car quickly navigates through the chicane section with ease as the chassis provides little fight with any input. The back straight away allows the car to reach its geared top speed of 146 mph before quickly stabbing the brakes for corner 12 entry. A series of turns later and the G1 car reappears on the front straight as the AF1 and Griiip teams look on with anticipation. The car is impressively fast and responsive, clicking off a 2:08 with a heavy field of cars competing for track space!

To put this into perspective the fastest MotoGP time at COTA is a 2:03 achieved by professional rider Marc Marquez. The car managed to run a 2:08, pull 2.6 g’s right and 2.3 g’s left with only 2 days of professional testing! Minor changes such as moving the remote mount shift mechanism to the steering wheel, more seat time and suspension adjustments should lead us to see quicker, more consistent times and hopefully a win in the Formula 1000 series.

View all posts by James Elkins